You are here: Home / book lists / The Most Magical Books With Dragons for Kids 4-10
0shares

Typically the stories with dragons are gripping enough to even engage the most reluctant readers. And since my two boys made me fall in love with Cressida Cowell’s Toothless, I haven’t stopped looking for books with at least one dragon as a central character ever since. We have been loving dragon books for the past three years and it was the one kind of book that I could always get them to agree upon.

And so now I consider myself somewhat of a guru on dragon books. I’ve compiled this list of our favorite picture books about dragons as well as early chapter books with dragons as one of the central characters. This is a great list to get you and yours started on a fantastic journey in the fantasy book genre with kids between four and ten. 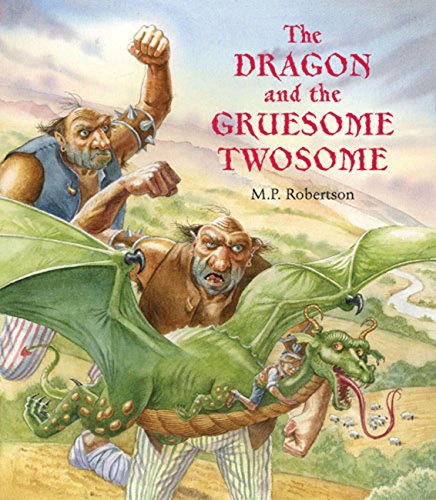 The Dragon and the Gruesome Twosome by M. P. Robertson. This is the fourth of an enthralling series about George and his Dragon. In the latest installment, George and his dragon find themselves in a fairytale kingdom under attack from fearsome troll twins, Gobbledegook and Balderdash. The gruesome twins are destroying everything and everyone in their path. Something must be done! George has a plan, but can it possibly stop such a devious duo? 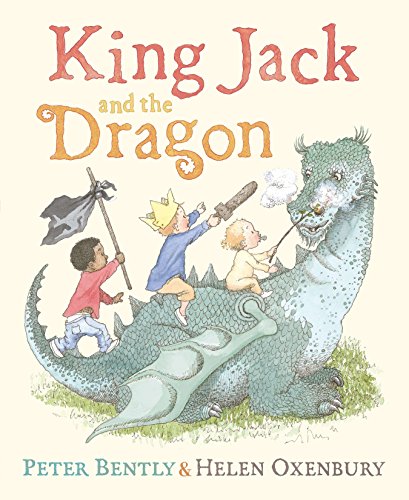 King Jack and the Dragon by Peter Bently. Night is falling and playtime is nearly over. But brave King Jack and his faithful knights Zak and Caspar are still protecting their castle fort from fierce dragons and terrible beasts. This captivating, joyful make-believe adventure is the perfect bedtime story for brave children everywhere

Have you seen my dragon?  by Steve Light. In the heart of the city, among the taxis and towers, a small boy travels uptown and down, searching for his friend. Readers will certainly spot the glorious beast, plus an array of big-city icons they can count. Is the dragon taking the crosstown bus, or breathing his fiery breath below a busy street?

The Library Dragon  by Carmen Agra Deedy. When Sunrise Elementary School advertised for a thick-skinned librarian with a burning love of books, Miss Lotta Scales knew she was perfect for the job. Who could guard books better than a REAL dragon?

“She kept a fiery eye out to make sure no one removed any books from the shelves…. The very thought of sticky little fingers touching and clutching, pawing and clawing, smearing and tearing her precious books just made her hot under the collar.”

Where’s the Dragon? by Jason Hook. Look inside this amazing picture book and feel the embossed pages. Can you see and touch the dragon? Can you find lots and lots of dragons? They’re everywhere! That’s because Mr. Jones is simply mad about the creatures. He carves them out of wood and he tells thrilling stories about them. But he’s never seen a real dragon, so he and his grandson George have set sail in search of one. 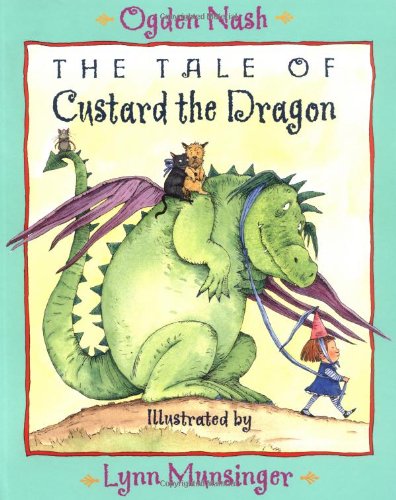 The Tale of Custard the Dragon by Ogden Nash. Belinda’s pet dragon, Custard, has fire-breathing skills galore but a coward’s heart, until an irate pirate breaks into Belinda’s house and Custard figures out a way to save Belinda and her pet cat.

Chin Chiang and the Dragon’s Dancee by Ian Wallace. Chin Chiang has long dreamed of dancing the dragon’s dance, but when the first day of the Year of the Dragon arrives and he is to dance with his grandfather, he is sure he will shame his family and bring bad luck to everyone.

Dragon Feathers by Arnica Esterl, Andrel Dugin, et al. The poor woodcutter’s son is sent on a mission to the dark forest to pluck three dragon feathers from the dragon’s back. Only then can he marry Beth, the rich innkeeper’s beautiful daughter.

Along the way, he meets several people in need of his help. But will his kindness and bravery be enough to protect him from the angry dragon?

A Gold Star for Zog by Julia Donaldson. What do dragons learn at Madam Dragon’s school?

How to fly, roar, and breathe fire!

In A Gold Star for Zog, Zog is the most eager student in the class, but he’s also the most accident-prone. With each test (and each bump, bruise, or scrape), his dream of earning a gold star seems further away than ever. But a mysterious girl keeps coming to his rescue. And when Zog faces his toughest test yet, she may be just the person to help Zog win classroom glory! 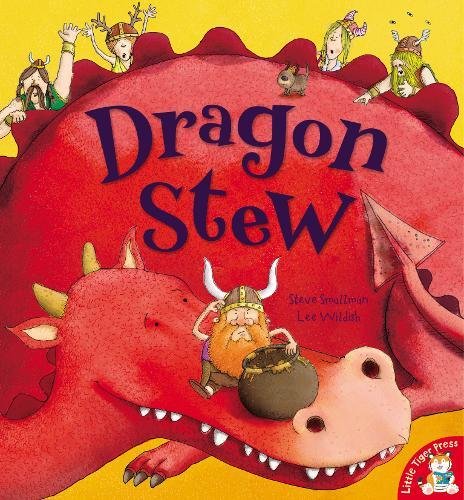 Dragon Stew by Steve Smallman. Five bored Vikings went out hiking, looking for adventure, something daring, bold and new. So they thought they’d hunt dragon, and then tie it to their wagon, take it home and chop it up, and make dragon stew! But when the Vikings set off to find their dragon, they get a BIG surprise…Hilarious, rhyming story from the award-winning author, Steve Smallman.

Sylvia and Bird by Catherine Rayner. Sylvia is the only dragon in the world and very lonely. But then she meets Bird. Bird is tiny and chirpy, nothing like the huge dragon. And Sylvia worries that maybe she and her little friend are too different to remain friends. Together the two friends take a journey that will change Sylvia’s life forever. From the award-winning creator of Augustus and His Smile comes a tender story about belonging and the power of true friendship.

The Reluctant Dragon by Kenneth Grahame. In this beloved classic, a kind, young boy befriends a poetry-loving dragon living in the Downs above his home. When the town-folk send for St. George to slay the dragon, the boy must come up with a clever plan to save his friend and convince the townsfolk to accept him.

Dragons & Marshmallows by Asia Citro. With magical animals, science, mystery, and adventure — the brand new series Zoey and Sassafras has something for everyone! Easy-to-read language and illustrations on nearly every page make this series perfect for a wide range of ages.

In the first book of this series, Zoey discovers a glowing photo and learns an amazing secret. Injured magical animals come to their backyard barn for help! When a sick baby dragon appears, it’s up to Zoey and Sassafras to figure out what’s wrong. Will they be able to help little Marshmallow before it’s too late?

Dragonbreath #1 by Ursula Vernon. Danny Dragonbreath can’t breathe fire, but he has no fear. And that comes in handy when a bad grade at school inspires him to enlist his cousin the sea-serpent’s help with a research project.

The New Kid at School: Dragon Slayers Academy #1 by Kate McMullen. When a traveling minstrel foretells that he is to become a hero, Wiglaf sets out to fulfill his destiny: he signs up at the Dragon Slayers’ Academy. But how can he ever hope to be a dragon slayer when he can’t even stand the sight of blood?

Where the Mountain Meets The Moon by Grace Lin. In the valley of Fruitless mountain, a young girl named Minli lives in a ramshackle hut with her parents. In the evenings, her father regales her with old folktales of the Jade Dragon and the Old Man on the Moon, who knows the answers to all of life’s questions. Inspired by these stories, Minli sets off on an extraordinary journey to find the Old Man on the Moon to ask him how she can change her family’s fortune. She encounters an assorted cast of characters and magical creatures along the way, including a dragon who accompanies her on her quest for the ultimate answer.

Three Tales of My Father’s Dragon by Ruth Stiles Gannett. The classic fantasy trilogy of Elmer Elevator and the flying baby dragon has delighted children and their parents for generations. Now, on the occasion of their fiftieth anniversary, Random House is proud to bring the three timeless tales together in one beautiful commemorative edition, complete with the original delightful illustrations.

The Dragon in My Backyard by Ethan Peltier. Stan loves his home on the farm and never wants to move. But one day, his dad announces that they are leaving. His dad has discovered a dragon living in a cave in their backyard. Stan just wants to meet the dragon and see if they can be friends. While his parents try to find a way to get rid of the dragon, Stan tries to help him. Can a kid change his parents’ minds? Can he save his new friend? Follow along with Stan and the dragon on their adventure to friendship.

Dragon Rider by Cornelia Funke. With a lonely boy named Ben on board, the brave young dragon Firedrake sets out on a magical journey to find the mythical place where silver dragons can live in peace forever. Flying over moonlit lands and sparkling seas, they encounter fantastic creatures, summon up surprising courage — and cross the path of a ruthless villain with an ancient grudge who’s determined to end their quest. Only a secret destiny can save the dragons in this enchanting adventure about the true meaning of home.

How To Train Your Dragon by Cressida Cowell. Hiccup Horrendous Haddock III, the quiet and thoughtful son of the Chief of the Hairy Hooligans, tries to pass the important initiation test of his Viking clan by catching and training a dragon. Can Hiccup do it without being torn limb from limb?

The Rain Dragon Rescue by Suzanne Selfors. Someone or something is stealing from the peaceful residents of Buttonville. But is the thief from the real world…or the imaginary one? Ben and Pearl are about to find out. When they report for duty at Dr. Woo’s, Mr. Tabby hands them a bucket and a shovel — for the collection and proper disposal of dragon droppings — and directs the apprentices to the hospital’s roof. Soon, they come face-to-snout with the dragon that lives there and find a pile of proof that he is the thief.

Before Ben and Pearl can persuade the dragon to stop stealing, an emergency call comes in from the Imaginary World. The rain dragon has been injured! But with Dr. Woo out of town and Mr. Tabby busy with percolating pixies, time is running out.

Jeremy Thatcher: Dragon Hatcher by Bruce Coville. Sixth-grader Jeremy Thatcher discovers a strange magic shop he has never seen before. He enters, and his life is changed forever. Buying what he thinks is a marble, he discovers he has really purchased a dragon’s egg.

We’ve loved reading so many of these books and I hope that you will too. If I’ve missed any of your favorite dragon books – comment below.

This site uses Akismet to reduce spam. Learn how your comment data is processed.

Literati – The Books We Can’t Wait To Receive! Join Me On Instagram!
0shares
We use cookies to ensure that we give you the best experience on our website. If you continue to use this site we will assume that you are happy with it.Got It!